KTM Malaysia is also proud to announce the unveiling of the 2017 RC 250 and RC 390, as stablemates to the all-new 2017 KTM 250 Duke and KTM 390 Duke. Since the RC-series’ launch in 2014 (RC 250 in 2015), motorcycle enthusiasts have been heaping nothing but praise on these thoroughbred sportbikes. Lightweight, agile, fast, the RC is the epitome of the READY TO RACE spirit to performance-seekers. They were often hailed as the closest motorcycles to the Moto3 racers duking it out on racetracks throughout the world.

As such, the advent of the RC-series had also spawned numerous racing championships and series worldwide to much success. Now, for 2017, the RC 250 and RC 390 have been updated, to pull ahead even further from the competition. 2017 KTM RC 250, although visually similar to its predecessor, the 2017 KTM RC250 has been updated in more ways than one. The lightweight steel trellis frame has been modified to fit the RC 250’s supersport ergonomics and dynamics. The steering head angle (rake) has been sharpened to 23.5 degrees, resulting in a shorter trail, shorter wheelbase and increased ground clearance, to make an already agile motorcycle even more agile. 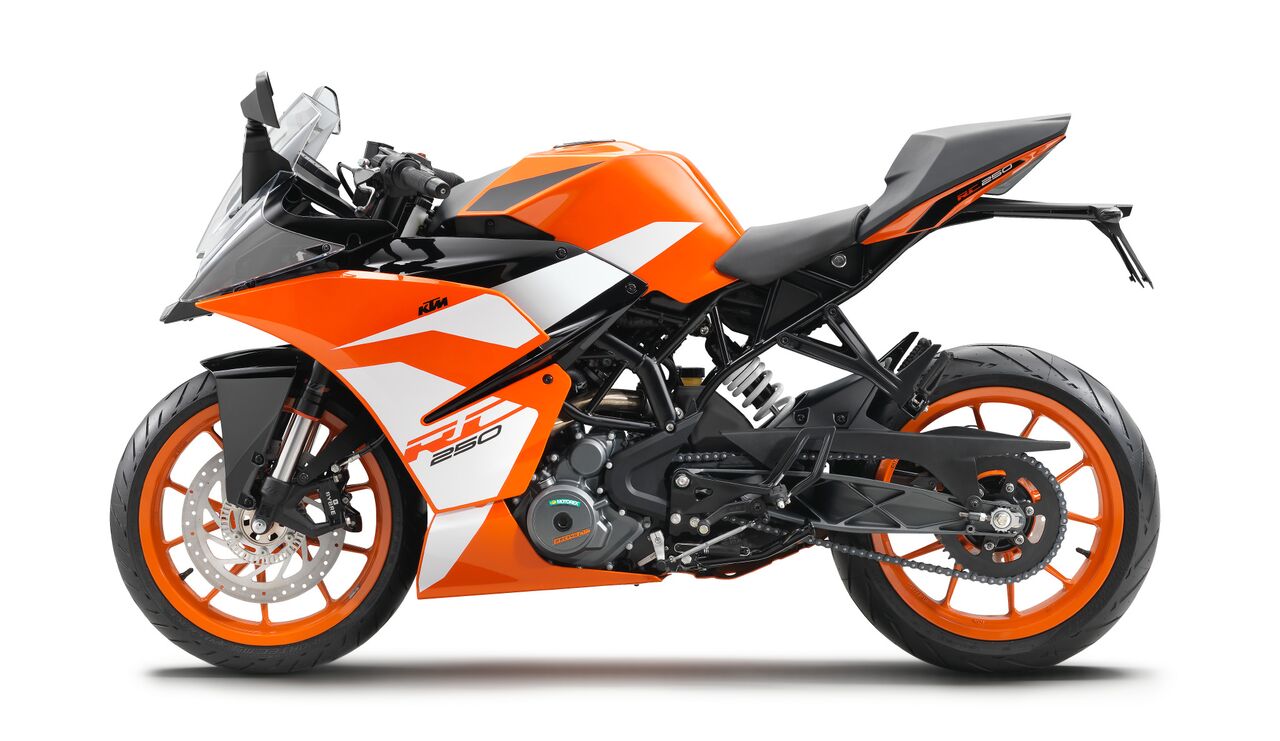 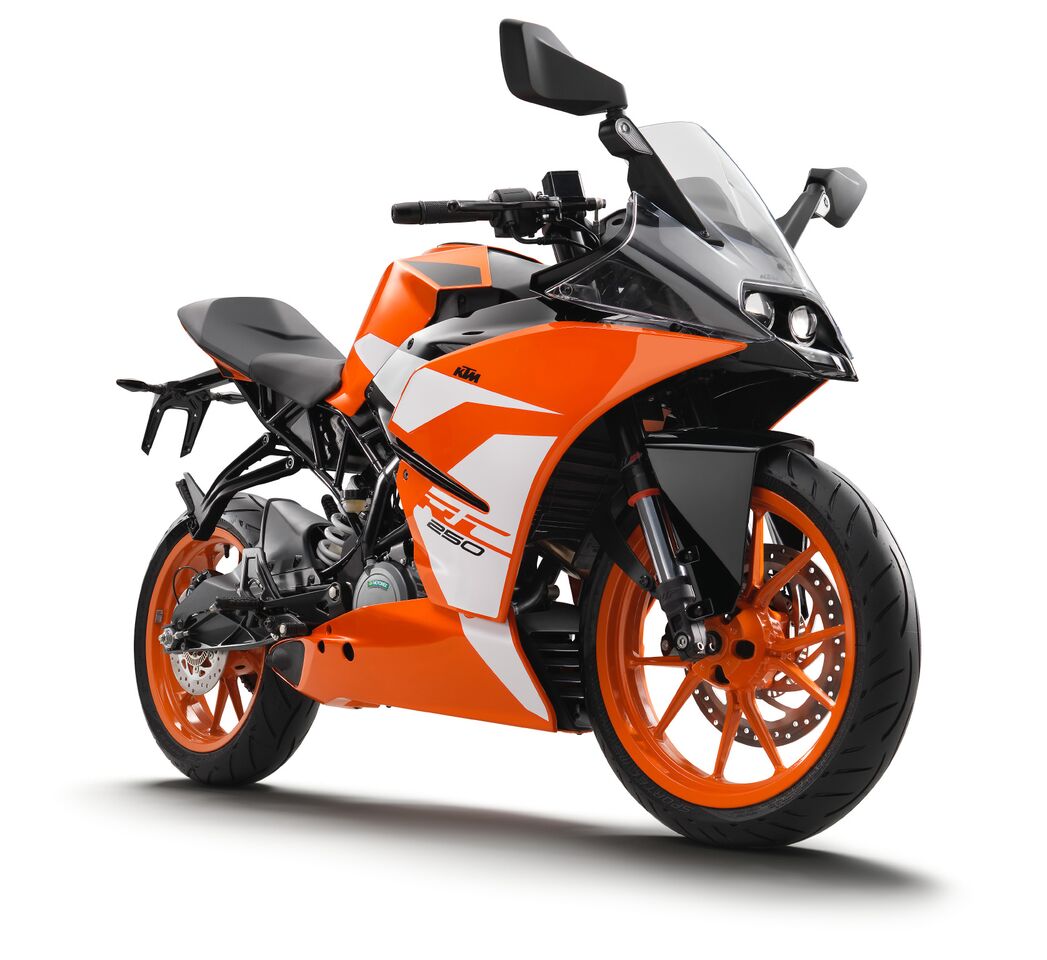 The engine’s power and torque is sent through a slip- and-assist clutch to a six-speed close ratio transmission. The slip function eliminates rear wheel chatter and lock up during aggressive downshifts, while the assist function acts as a self-servo action to squeeze the clutch plates together to ensure optimum power transfer; in addition to providing a light clutch lever pull. The RC 250’s brakes were co-developed with Brembo. The bike is capable of delivering maximum power of 30 bhp (23 kW) @ 9000 RPM and peak torque of 24 Nm @ 7250 RPM.

The front 300mm disc is clamped by a radially-mounted four-piston caliper, while the rear 230mm disc is clamped by a floating caliper. ABS is standard on both ends. Needless to say, braking performance is ensured. While the bodywork looks as sharp as its predecessor’s, it is in fact updated. The panels have been reworked and in conjunction with new footrests and new foot pedals, the new RC 250 provides deeper lean angles for extreme cornering. Bold, new graphics put the finishing touches on a great bike. 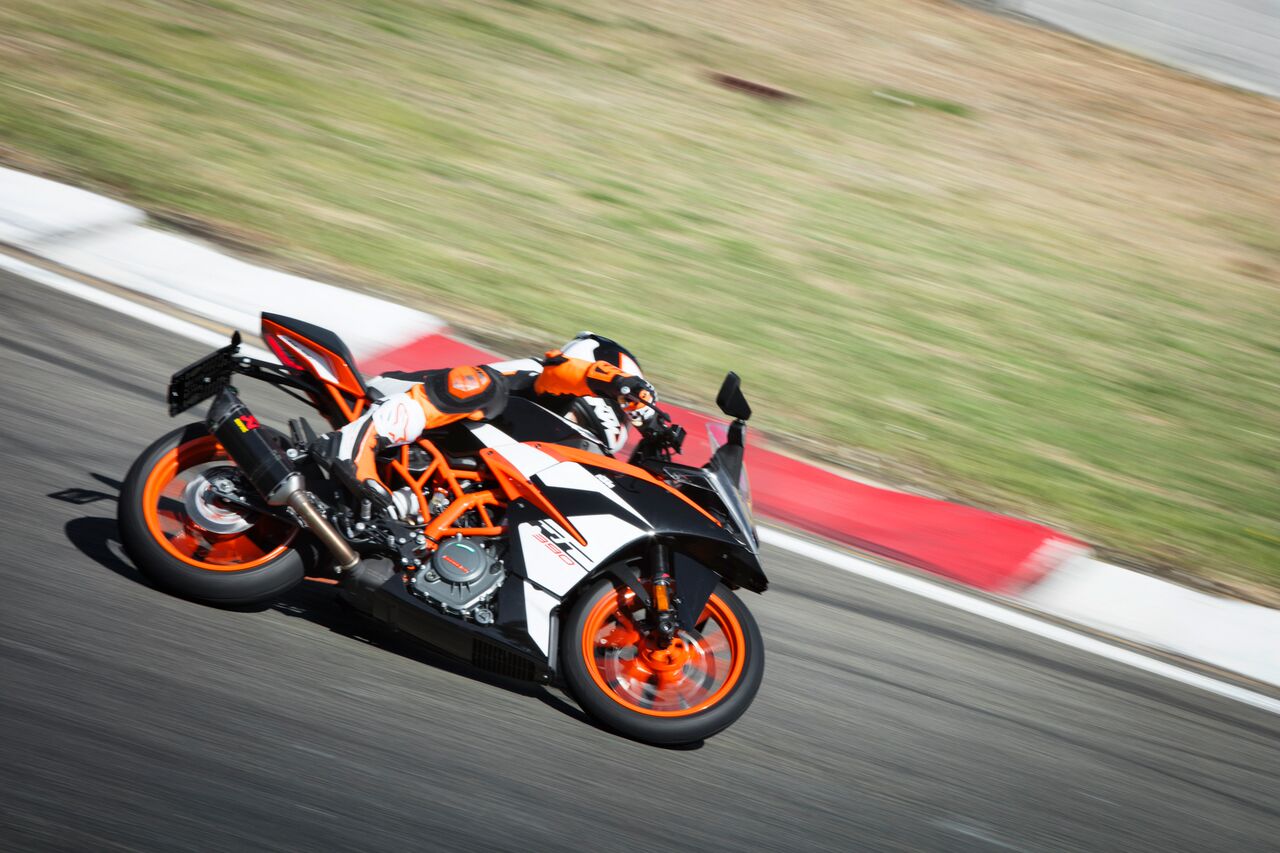 As with the 2017 KTM RC 250, the 2017 KTM RC 390 is new in many aspects despite appearing similar to its predecessor. The frame is shared with the RC 250 and now has a 23.5-degree rake. With the updated frame, the KTM RC 390 now has a shorter trail, shorter wheelbase and increased ground clearance. The modifications ensure that the RC 390 is racier than before. The

KTM RC 390 also shares the same design as the KTM RC 250, sharing the same 43mm upside-down forks and single rear shock which is bolted directly to the cast swingarm. The front brakes are however different on the KTM RC 390, employing a 320mm brake disc, while still clamped by a radially-mounted, four-piston caliper developed jointly with Brembo. ABS is standard for both ends. What makes the biggest difference to the KTM RC 390 is of course, its state-of-the-art engine. This liquid-cooled, single-cylinder, DOHC, 375cc powerplant is the prime example of how KTM sets the standards in terms of specific power output and compactness. The KTM RC 390’s engine features stacked transmission, forged piston, Nikasil-coated cylinder, forced lubrication, and a new exhaust system resulting in a punchy 44bhp. The KTM RC 390 is now equipped with the slip-and- assist clutch. A new addition to the 2017 KTM RC 390 is the Ride-by- Wire (RbW) throttle, to ensure smooth torque whenever it is needed. Signals from the throttle is interpreted by the ECU to regulate the throttle valve according to the rider’s wishes and riding conditions. Other new 2017 features include a 12mm thicker cushioning for the rider’s seat, besides reach-adjustable brake and clutch levers.