The Honda EX5 gets trendy with a new design

The Honda EX5 gets trendy with a new design Boon Siew Honda, the official importer of Honda Motorcycles in Malaysia, has just announced the arrival of a new EX5 that now shows a new design intended to capture the attention of a younger public.

The Honda EX5 has become a name everyone recognizes in Malaysia, and since its introduction in 1987, this popular cub model has sold more than 2 million units!

The new model gets even more trendy with the addition of new graphics with vintage stripes, the use of a new chrome exhaust shield that not only gives the EX5 a premium look but also protects from the heat, a new chrome emblem and also a new chrome rear grip to highlight the vintage style. The Honda EX5 features the first fuel injection system of a cub model in Malaysia, the famous PGM-Fi, that Honda developed to increase the fuel efficiency as well as better drivability. With a 4.3-liter fuel tank, the EX5 is able to go further without the need to stop to fill up for petrol.

Boon Siew Honda also reveals that the new EX5 is available in a new Space Magenta Metallic color, an option only available in the cast wheel version that can also be bought in Pearl Nightfall Blue or Candy Scintillated Red. The price of the EX5 cast wheel version is RM5404,94, including GST but exclusive of Road Tax, insurance and registration.

There’s also the spoked wheel version of the EX5, available in Pearl Magellanic Black or Pearl Nightfall Blue. The price is RM5150,54 including GST, but excluding Road Tax, insurance and registration.Boon Siew Honda also confirms that the EX5 comes with a two year or 20.000 km warranty, whichever comes first. 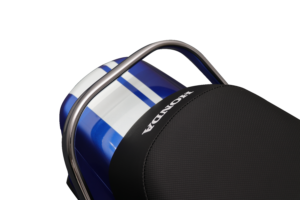 For more information on the new Honda EX5 please visit www.boonsiewhonda.com.my or call Boon Siew Honda Toll-Free number at 1800-88-3993 (Monday to Friday, 9am – 5pm, except for public holidays).

Secondhand Harley-Davidson motorcycles to be distributed to dealers in India soon
324 km/h is the new speed record on sand!