Kawasaki believes that the future of motorcycling includes forced induction engines, but to take motorcyclists to that future, the Akashi brand decided to look to its past, specifically to the original H2 supercharged bike that the Japanese company launched back in 1971. At the time, that was the fastest production motorcycle on the road, with a 1:1 power to weight ratio.

Riders fell in love with that H2, but bad brakes combined with a lot of power and a not so good suspension, meant that the bike was nicknamed the “widowmaker” for the worst reasons possible.

In 2015 Kawasaki decided to have a second stint with supercharged bikes, introducing the track only 300 hp Ninja H2R, a bike that already broke the 400 km/h record by the hands of Kenan Sofuoglu, and the road version Ninja H2 with 100 hp less, but still, an amazing bike to ride thanks to that special supercharged engine.

Now, in 2018, we have the pleasure to be able to enjoy the sport-touring version of this Ninja H2, dubbed by Kawasaki as Ninja H2 SX, which we tested in the premium trim Special Edition (SE) specification.

This SE version, compared with the standard H2 SX, gains a full color TFT screen with different view modes, upgraded brakes with steel braided lines, a special metallic paint scheme, hard side-bags, a bigger front screen (not adjustable), quickshift for upshifts and downshifts, LED corner lights embedded on the fairings, a center stand and for those looking to enjoy the full power of the supercharged engine, this bike also comes with launch-control mode for perfect standstill accelerations. For those that travel even if temperatures are lower than comfortable, then you should know that the SE version also factory equipped with heated-grips! The engine on the Ninja H2 SX is a special tuned version of the same in-line-four we’ve already seen on the more sport or track oriented H2’s, with Kawasaki reworking the torque curve for a better mid-range performance.

For that intent, Japanese engineers have changed a lot of the engine’s internal components, and those include reinforced pistons, 10 mm smaller throttle valves (40 against 50 mm on the Ninja H2), variable length intake runners and a higher compression ratio of 11.2:1 compared to the 8.5:1 on the Ninja H2. The combustion chamber is much more heat efficient than before, so Kawasaki was able to use only one oil jet per piston, resulting in a 300% reduction on oil pump volume.

But the crown jewel of this bike is Kawasaki’s own designed supercharger, produced also by Kawasaki. This supercharger uses a propeller with precision CNC machined blades, six of them, at the tip, that merge into 12 blades at the base. They spin 9,2 times faster than the speed of the crankshaft, so, if we take into account that the crankshaft spins to a 12.000 rpm redline, that means the supercharger spins up to an almost unconceivable speed of 110,400 rpm, with Kawasaki saying that the blades-edges break the sound barrier! 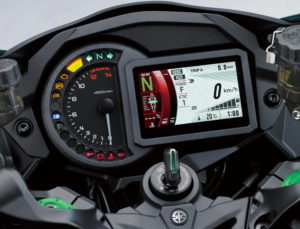 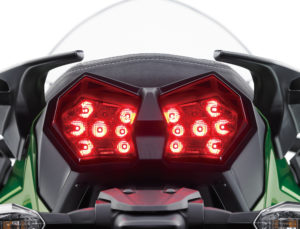 But how is it to ride this sport-tourer beast of a bike?

As a sport-tourer, the H2 SX it’s much more of a sport bike than a tourer. That is clear as soon as I climbed aboard this Kawasaki, and with the seat set at 835 mm, the foot pegs mounted high and backwards, the handlebars aren’t high enough so that the rider adopts an upright riding position. It’s not an uncomfortable riding position, but after a day riding the Ninja H2 SX SE I felt my knees a bit sore.

The first moments riding this bike will be a bit challenging, especially at normal riding speeds inside the city. This bike weighs no less than 256 kg wet, and the center of gravity is high, even though Kawasaki tried to fight this by tilting the engine forward a bit. So, at lower speeds, the H2 SX will make you work a bit more than usual, and the large volume of the aerodynamic fairings won’t make it easier when tackling urban traffic.

But take her out to more open spaces, crack open the throttle, hide behind the small – for touring parameters – windscreen and you’ll find yourself travelling at warp speeds. All that weight disappears as if it were magic, and suddenly this supercharged Ninja starts to work for you and not the other way around. To be honest, I didn’t feel the need to use power mode M (medium). The difference in power delivery compared to F (full power) isn’t so big that makes the rider switch from one to the other, so I believe most riders will opt for power mode M. The L (low) should be great for wet roads, but during my days with the Ninja H2 SX the sun was always at full strength, so I couldn’t test the L mode, which cuts power to 100 hp.

This Ninja H2 SX has a really great drive out of slower corners too, and the torque is available so down in lower rpms that I barely felt the need to use the precise and smooth gearbox.

The quickshift only works above 2.500 rpms, and going up the gears is perfect, especially when accelerating hard with the throttle wide open, just as a race bike needs to be. On downshifts the rider needs to close the throttle completely, and most of the times, on touring speeds, that isn’t a problem. But when riding aggressively the downshift function isn’t all that smooth or precise, and going down the gears, especially from 4th to 3rd gear, or lower, I’ve noticed the gearbox works better if I used the light action clutch, with the slipper-assist function digesting the negative torque that could end up locking the rear wheel. As this is a touring bike, I tried as best as I could to understand just how well the bike behaves with side-bags at higher speeds. The Ninja H2 SX won’t be unstable, but without them on the bike, the rider will get a much better feedback from the front wheel, gaining confidence to keep pushing to the limit. The wheelbase is also 30 mm longer than its siblings, so the H2 SX is pretty stable in a straight line. That extra weight I complained about when riding in urban areas, becomes an advantage on these situations.

And on a side note, Kawasaki could have installed a steering damper on the H2 SX, to help control that front end.

On tight corners the rider needs to gain a bit of confidence before shifting all that weight from one side to the other, but the design of the large 19-liter fuel tank is near perfect both for touring and for sport riding. It allows the rider to move around while leaning the H2 SX through the corners, and provides a very good support to the legs, so the arms won’t be doing much effort to keep it all under control, which translates to a comfortable ride, which could be better if the seat had thicker padding. For the passenger the seat isn’t also near as good as a touring bike needs to be, so whoever goes on the back, needs to be prepared for a hard and small seat.

And what about the heat coming in from that powerful engine and the supercharger?

Well, Kawasaki learnt something from the Ninja H2R and H2. Those bikes suffer with heat management, and whoever rides them, will feel the heat in the legs. For the H2 SX, Kawasaki reworked the side fairings and, above all, the ram-air duct has a direct path and the intake charge is minimally heated. As a special note, Kawasaki ads emotion to the ride by having a small hole in that duct, which allows the rider to hear the distinct chirping of the supercharger when the engine is on overrun. Nice one Kawasaki! Suspension duties are taken care by fully-adjustable Kayaba (KYB) units. On both ends the KYB shocks are firm and compliant at the same time, allowing to pick-up a more aggressive riding style and tightening the corner entry without upsetting the bike, and when needed they absorb road bumps with ease.

And as fast as the Ninja H2 SX is on a straight line, she also needs to slow down fast!

For that mission Kawasaki uses a system with double 320 mm discs and Kawasaki branded 4-piston monobloc calipers at the front, while at the back a single 250 mm brake disc gets bitten by a 2-piston caliper.

Kawasaki opted to leave behind the proven Brembo M50 calipers of the Ninja H2 sport version, and that decision comes with a cost in two ways: it might lower the final price of the Ninja H2 SX SE because a Brembo M50 caliper should have a higher price than the Kawasaki branded calipers – although on a bike with such a high price-tag that argument falls to the ground -, and second, it makes the brakes feel less powerful.

Don’t get me wrong! The brakes on the Ninja H2 SX SE are powerful enough to slow down this bike from full speed to a complete stop without a problem, and in a very short distance, with the cornering ABS very well calibrated. But the initial bite of the calipers on the disc doesn’t feel powerful as I expected on such a sporty bike.

Let’s face it: a sport-touring bike capable of hitting 299 km/h easily, with a supercharged engine that delivers no less than 200 hp, weighs well over 250 kg and has a price tag so high, isn’t the kind of bike for everyone. You’ll need to pay attention, more than usual, when riding the ultra-fast Ninja H2 SX Special Edition, but if you do have the experience to explore all that this Kawasaki has to offer, you’ll be in for the ride of your life!

Kawasaki almost hit the spot for the touring side, but the aggressive riding position ruins the comfort on longer rides, and the seat isn’t at all padded enough by touring standards. As for the sport side of things, this Ninja H2 SX SE it’s one hell of a bike, fast enough to keep up with all the 1000 cc superbikes, but her weight might prove a bit of a challenge when things heat up. What I liked – The supercharger gives an enormous boost in accelerating the Ninja H2 SX to warp speeds, and the heat that comes out of it isn’t as bad as with her sisters H2R and H2. The futuristic design isn’t to everyone’s taste, but I kind a like it, and it sets this bike apart from all others on the road. The riding assistance systems are great, although a bit intrusive.

What I didn’t like – The fuel consumption for a touring bike isn’t the best, and from the 19 liter fuel tank I could manage, at best, 200 km riding at normal pace. Open up the throttle more to enjoy the supercharger and that range lowers to 150 km. The riding position isn’t all that touring as promised by Kawasaki, and the brakes could offer a better initial bite. 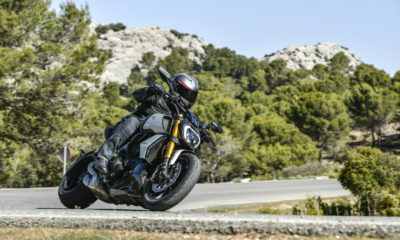