In Akashi, Kawasaki engineers seem to be working hard on a new electric motorcycle. At least that’s what we suspect after a set of patent drawings surfaced on the internet, with what seems to be an electric motor featuring a set of special features that will make this Kawasaki pretty special.

Kawasaki already knows what it takes to create an electric motorcycle, at least in theory. In 2014, the Japanese brand showed and stunned the motorcycle world with what can only be described as a transformer motorcycle, the J-Concept. Although the most interesting feature was how the J-Concept could change its appearance, the electric motor was also a special feature on that concept bike. But since then, the J-Concept has been hiding inside Kawasaki headquarters, with no news about this project coming to public.

Well, these new patent drawings show a very detailed electric motorcycle, which makes us wonder if Kawasaki hasn’t been working over the last couple of years on an evolution of the electric motor seen on the J-Concept.

The bike seen on these drawings has ram-air and an oil-cooler. These elements are usually used on combustion engines. The ram-air is especially important on sportbikes, sucking fresh air and sending that air at great pressures to the engine, through the air-box. The oil-cooler, as the name implies, allows the oil to cool down while the pump on the sump pushes the oil through a specific route on the engine, cooling down the internal elements.

Another cool feature on these patent drawings is the use of gears. Electric bike manufacturers usually go for an automatic transmission, and the rider only controls the throttle. But on the case of this Kawasaki electric motorcycle, the transmission has gears, meaning the rider will still need to select the correct gear. This should make riding this Kawasaki really fun!

Will we see the Akashi factory launching this electric motorcycle on the market? If we have to guess, we would say Kawasaki is seriously considering launching the e-bike on the market, and we wouldn’t be surprised if we get more news about this project in the next few months. Latest TS by Verge Motorcycles has a hubless rear wheel 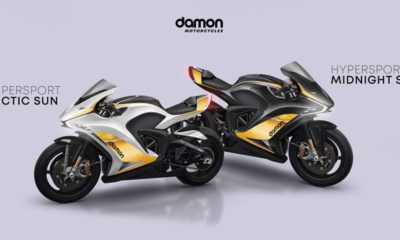 Take A Look At The Eclimo ES11: An Electric Scooter From Malaysia! Cagiva To Be Reborn As an Electric Motorcycle Brand By 2021 BST Hypertek – An electric madness with a high price tag

Are you a Dragon Ball fan? This is for you!
KTM and Soficat renew their partnership