The riders will be battling one another in Argentina this weekend.

The Yamaha WorldSBK Team will be heading to the Southern Hemisphere again this season after the opening race in Australia. This time, the team will be heading to the Circuito San Juan Villicum in Argentina for the penultimate round of the 2019 FIM Superbike World Championship. This race is rather pivotal for Pata Yamaha riders Alex Lowes and Michael van der Mark, as the two are aiming for a podium win to battle for third place in the overall standings.

Lowes currently stands third place with 279 points whereas van der Mark trails behind at fourth place with 274 points. The inter-competition is rather tight. GRT Yamaha Supported WorldSBK riders Marco Melandri and Sandro Cortese has scored well in Argentina in the past. Melandri considers the circuit as the most fun to ride whereas Cortese is aiming to repeat his triumphant podium finish last year. Loris Baz and the Ten Kate Yamaha Supported WorldSBK team will also be eyeing the top three this time after making an impressive return in Jerez this year.

Yamaha currently caps the top three of the manufacturer’s championship with 384 points, trailing behind Kawasaki and Ducati. “Last year was our first visit to Argentina and I really enjoyed it. The track itself is quite technical with some flowing changes of the direction this, together with the fast parts and the long back straight make it a fun circuit to ride. It’s also got one of the best backdrops of any racetrack, with the surrounding mountains making it really cool. I’m fully focused on getting back to work on Friday, working on our setting to put us in the best position to fight for the podium on Saturday and Sunday, which is our target as always,” says Lowes as quoted from Yamaha Racing. “I really enjoy going to Argentina. Last year was a difficult race for us but I’m pretty sure that it will be a lot better this year given the progress we’ve made. Our whole package has improved so I’m confident we will have another strong weekend Circuito San Juan Villicum in San Juan this weekend. We are in a really nice flow at the moment, so my goal is to once again be fighting for the top positions in the penultimate round of the season.” “I’m really happy to be heading to Argentina, as it’s one of my favourite places. I really like the country and the track is really fun to ride, I really enjoyed racing there last year. I’m excited to be returning to the track again, although I hope they haven’t had too many car races there in the interim and that the tarmac is still as flat as it was last year. I am confident that we can keep improving, and that’s what we’ll be working towards this weekend.” “Magny-Cours was a very difficult and unlucky weekend for me, so I’m looking forward to hitting the reset button ahead of the races in Argentina.  The Circuito San Juan Villicum is very special and I enjoyed racing there last year on the Supersport bike. This will be my first time there on the Superbike and I think it will be even more enjoyable on the YZF-R1, especially the fast sections and the long back straight.” “I’m looking forward to heading back to Argentina and it will be cool to race at the Circuito San Juan Villicum once again. We are improving every time we take to the track and we are getting closer to the podium with every race, so let’s see what Argentina brings. The track was new last year and quite dirty, which made for tricky conditions, so hopefully, it’s cleaned up a bit with 12 months of use. I’m not really sure how our bike will work there, but the grip can be a bit unpredictable and I think the YZF-R1 suits these conditions. The goal is simple; to continue improving, to close on the guys at the very front of the race and, if possible, step onto the podium for the first time.” 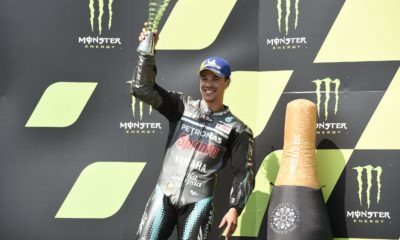 MotoGP – Syahrin back in Moto2 after signing with Angel Nieto Team
Marc Marquez is crowned as the 2019 MotoGP World Champion!