With one more round to go, Nathan Watson delivers a sterling performance in the latest round.

Red Bull KTM Factory Racing rider Nathan Watson has claimed his third victory of the season in the CFS: Championnat de France des Sables. Watson extends his series after winning Round Six in Grayan-et-L’Hopital. Teammate Camille Chapeliere also managed to deliver a stellar performance coming in at fourth place. He maintains his position of being third overall in the championship with one round remaining.

The CFS: Championnat de France des Sables will end with round seven at Enduropale du Touquet on 2 February.

“Overall, I had a really great race today. As beach races go, this one went pretty much perfectly. I’m not sure what it is about this place but I enjoy coming here and love the mixture of open high-speed beach and rough sections in the surrounding forest. We made some changes to the bike to allow for more power and speed and that helped me get a good start,” says Watson as quoted from KTM Factory Racing.

“I was about top five, but made some quick overtakes and hit the front on the opening lap. I was able to lead every lap and felt comfortable controlling the pace. Towards the end the organisers cut the race short. I could have avoided an extra fuel stop to save time, but I had already done my three stops at that point, so although I lost time there thankfully it all worked out ok. It’s the final push now towards Enduropale du Touquet. I feel in a good place and go there confident and focused on defending my crown.”

“I feel like a podium result was possible today. So I’m disappointed a little with fourth. I was having a good race, battling for the top three all the way through. I got the holeshot and put myself in a good position. But towards the end of the race nobody told my team that it had been shortened and as a result I did an extra fuel stop, which cost me a better result. It’s frustrating, but it is what it is. With le Touquet next, I’ve shown this year that my starts are good and my speed is strong, so I’ll go there wanting to settle for nothing less than a podium result.” 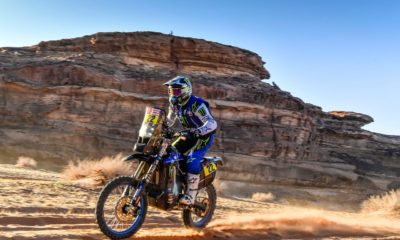