Honda just unveiled the Honda CB-F concept online for the first time. The showcase of the concept was initially scheduled for the 36th Osaka and 47th Tokyo Motorcycle Show 2020. The CB-F Concept is a mixture of modern cutting edge technology while paying homage to the legendary CB900F (aka CB750F in Japan). A Japanese global model which was also important in the North American racing scene. Which brought six-decades of CB models an iconic status. 1982 Honda CB750F ridden by Freddie Spencer, Mike Baldwin, and Roberto Pietri to a sweep of the 100-mile Superbike podium at Daytona that year. The bike was powered by a 1023cc DOHC air-cooled, four-valve inline four-cylinder making 138 horsepower @ 10,500 rpm and was capable of reaching a maximum speed of 155 mph. The full specification of the concept is not out yet. However, as of now, we know the bike features a  998cc water-cooled, 4-stroke, 4-valve, inline 4-cylinder DOHC engine.  As for the chassis, the CB-F Concept features a lightweight chassis with high-tensile steel mono-backbone structure. In the case of the suspension, the concept features an inverted front fork and mono-shock at the rear with a lightweight aluminium single-sided Pro-Arm configuration.

The showcase of the concept was initially set for Osaka and Tokyo Motorcycle Show. However, the events were recently cancelled because of the Covid-19 outbreak. For the first time, Honda unveiled the Honda CB-F concept online just a while back. Did you know Honda is replacing the cancelled events with an online Virtual Motorcycle show today? Stuck and bored at home because of the MCO or lockdown? Well, this is something you can catch this week!

Read all about it here: 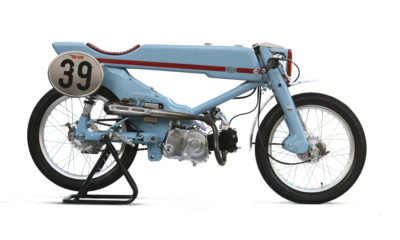