The upcoming touring motorcycle from Benelli has been spotted in China. Here are the detail and specs of Benelli’s latest tourer, Benelli BJ 1200 GT. Last month we came across a few spy shots of the upcoming TNT 600 and 600RR. However, this time around someone has leaked the images of Benelli’s BJ 1200 GT Touring Motorcycle. The first 2020 TNT 600 rumour actually came to reality with the launch of the QJ SRK600 last week. The Italian brand under Chinese ownership has been working on various models since last year but with this latest leak, things just get more interesting. Looking at the leaked pictures, here are a few things we can conclude. To begin with, according to sources, the BJ 1200’s engine is developed based on the Benelli Tornado Tre 1130 engine with displacement increased to 1209cc, new con-rods, crank, pistons and head. This transverse three-cylinder engine is expected to push around 136hp and help the BJ 1200 GT attain a top speed of 225 km/h+. 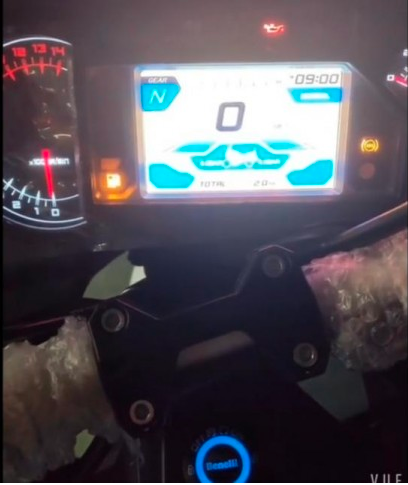 On top of this, the BJ 1200 has a list of impressive equipment and creature comfort features too. From the leaked pictures, we can confirm there is keyless ignition, analogue tachometer and speedometer with TFT display.  Aside from this, we believe the BJ 1200 would roll in with electric mirrors, tyre pressure sensor and even an adaptive cruise control system with a camera or radar system. From the looks, the BJ 1200 is expected to weigh around 330 kgs and have a wheelbase of 1,550 mm. Overall, the  BJ 1200 goes in the same category as the Honda Goldwing and BMW K1600 GTL. However, unlike others, the BJ 1200 uses a chain final drive compared to shaft drive in others. As for more detailed specification of the bike, we just need to wait for Benelli’s or QJ Motor’s official announcement or more leaks like this from China.

The spotted BJ 1200 GT has no stickers or badges; however, we assume this bike would be launched under QJ Motor first then under Benelli in the upcoming months. Given the ongoing COVID-19 pandemic, Benelli might pull the cover off this bike by 2021 at least.