If you have never heard of Voltz Motors, here is your chance to learn more about them! There are speculations that Brazilian electric motorcycle company Voltz Motors would be announcing a new model soon. Known for its EV01 seated electric scooter, there is a possibility for an upgraded and bigger version. According to Electrek, the upcoming Voltz Motors EVS electric motorcycle will be debuting simultaneously with the opening of Voltz Motors’ new Sao Paulo flagship store this August.

According to an unnamed source, “It will be a smart electric motorcycle due to a large amount of tech built into the bike and the possibility for different combinations of battery packs.” RideApart notes that despite the dubious images, the naked bike bears resemblance to the Zero SR/F. Its proportions show how bulky the tires are, much like the Honda Grom. It features a full-colour LCD dashboard. It would perhaps come with smartphone connectivity and satellite navigation. Electric bikes are slowly increasing the usages of IOT devices as of today.

Despite that, Voltz Motors made no indication of a new model on their website with just the EV01 electric scooter on display. We will have to wait for further information to confirm any new releases. 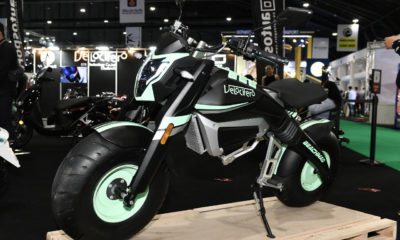