Upcoming KTM RC390 has been spotted with revised styling, new chassis and updated engine. Here is everything you need to know! KTM RC390 and Duke 390 were initially developed under a joint program of Bajaj and KTM engineers. Both the single cylinder 373.2 cc machines made their first debut back in 2012 during ECIMA in Milan. In the case of the KTM RC390, the major update the model received was losing the underslung exhaust which was replaced by a conventional slip-on style exhaust system. However, judging from the recent spy shots, it looks like the KTM RC390 would receive one of the biggest updates for 2021. Since we only have the spy shots of the upcoming KTM RC390 we can’t comment much on the figures. However, here are a few things we managed to pull off from the leaked pictures.

Posted by Motorradmagazin on Monday, 3 August 2020

To begin with, this model receives one of the biggest updates in terms of both design and tech. One of the notable item that can be spotted is an all-new fairing. Alongside the new fairings, the model receives KTM 390 Duke style LED headlamps. It’s good to see the model getting a refresh, however, if you are a fan of the current-gen RC headlamp, this might be bad news for you. Aside from this, the LED indicators are now embedded in the fairing instead of the side mirrors as seen on the current model. KTM is ditching the single-piece seat for a much sleeker conventional two-piece seat for the rider and pillion. As for the chassis, it looks like KTM has updated the frame too. Looking at the rear end, just as much as the front; KTM has done some work on the rear tail section and tail lamps too. Overall, from the front to rear the new RC390 actually looks bigger and…better! In the case of brakes, KTM sticks with radially mounted ByBre brakes as before. However, this time the calliper and discs look much sleeker and lighter- More likely an updated unit. As for the engine, the new RC390 appears to feature the same powerplant possibly with minor performance and Euro5 compliant updates. 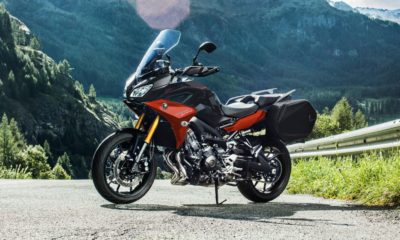