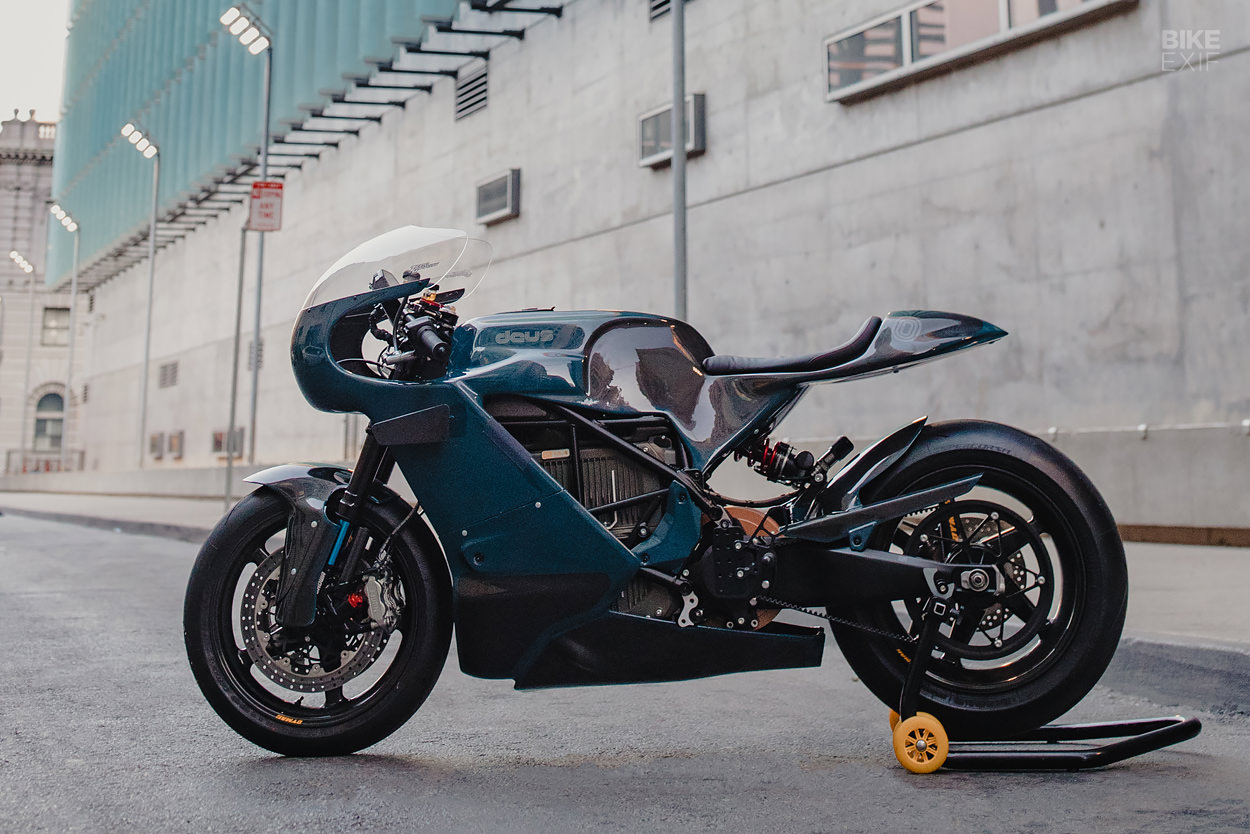 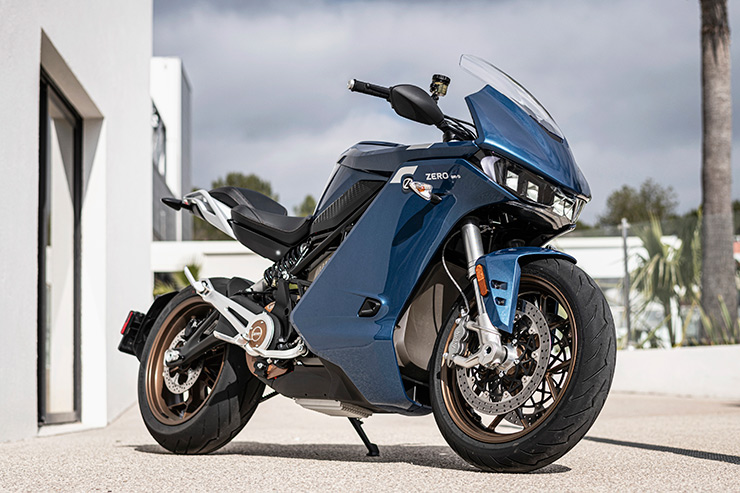 The Zero SR/S was launched earlier this year and it was technically a faired version of the naked roadster, the Zero SR/F. Being able to push 110 hp and 190 Nm of torque, the Zero SR/S in an incredible base bike to start off a very fast custom build. 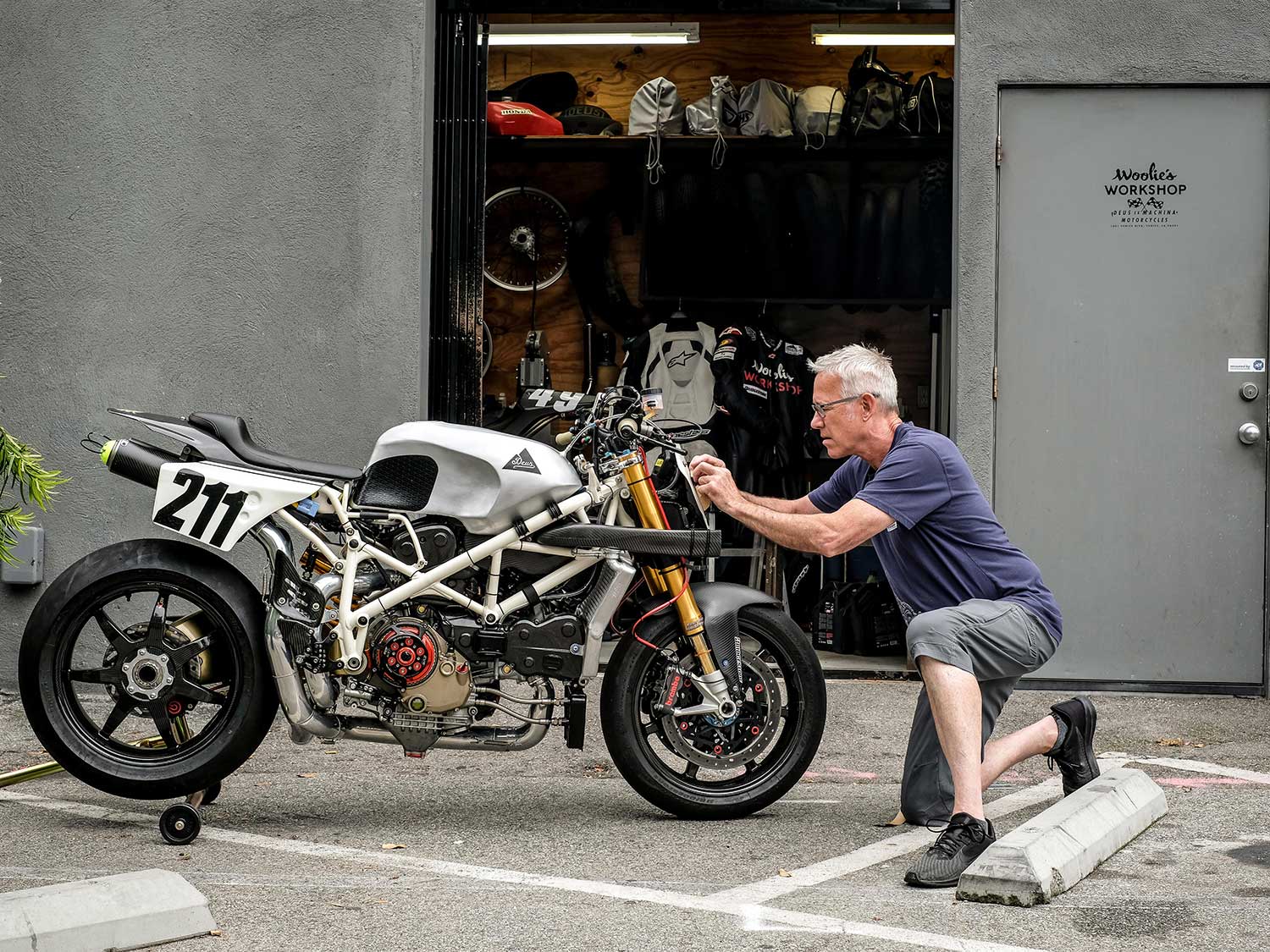 This custom Zero SR/S is the last project that the famous master craftsman and the Director of Deus Ex Machina US, Michael Woolaway aka ‘Woolie’ completed before moving onto a new job.

“It’s the first electric motorcycle I’ve ever been involved with. I met the guys out at Pike’s Peak, got a good look at the bike and thought ‘You know, man, that bike is the perfect platform to build something with because there’s no gas tank really’. There’s this trellis frame that’s beautiful and everything else comes off and there’s nothing there. So in my mind, I was thinking ‘I’d love to do something with that bike because it’s a blank sheet of paper.”

“I wanted to do something kind of old and new,” says Woolie. “Old shapes that I kind of grew up with, and new technology. And I wanted to build a bike that wasn’t really necessarily street legal, because that’s what I really love doing, and I thought that it might help lend to a better end product.” Woolie added.

“We didn’t have a design brief, really, we just connected with Woolie and he was pumped to do something. So we got him a bike and told him to do something special… but whatever he wanted.” 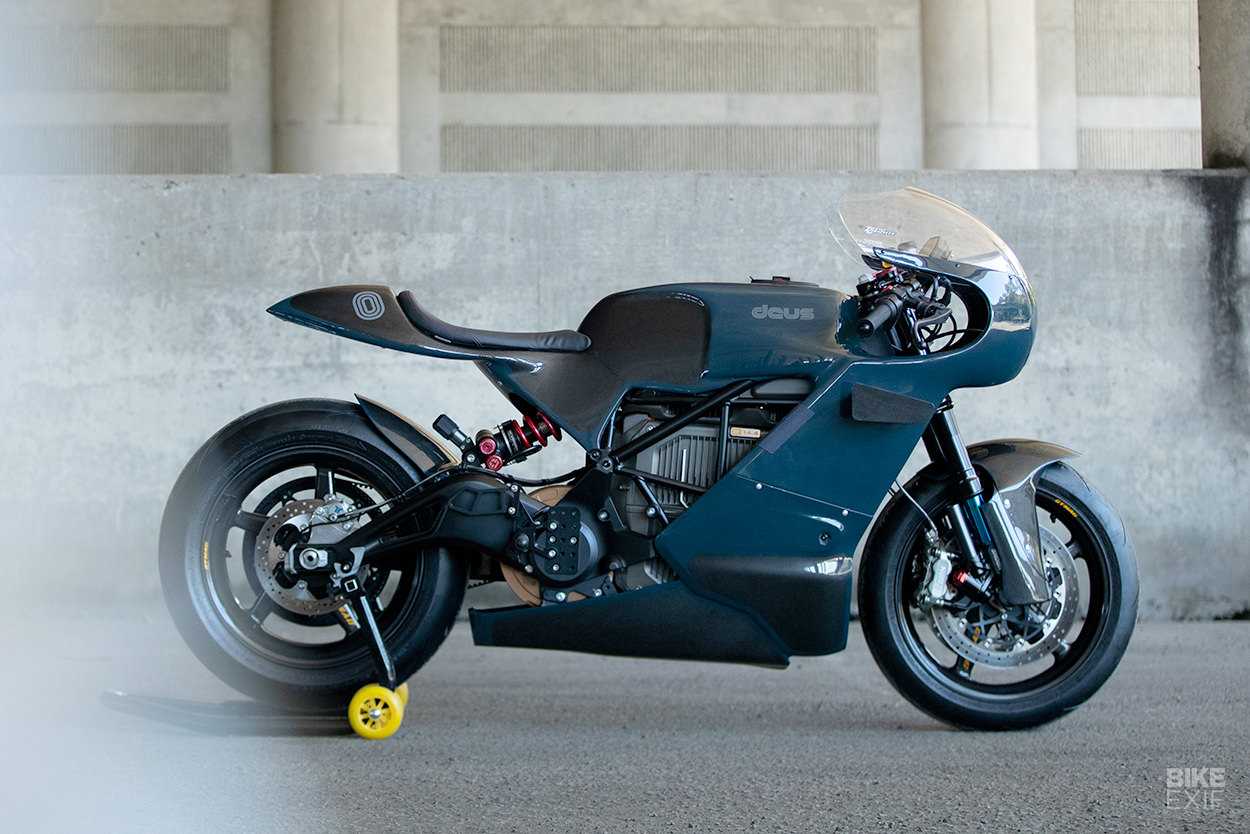 Woolie started the build with mocking up all the bodywork by hand using foam. Yep, Woolie is all about the retro life so he decided to use old school design techniques than using modern digital 3D renderings. During the design stage, Woolie started off with the tank, then the front fairings and finally the tail and lower bits of the Cafe Racer. 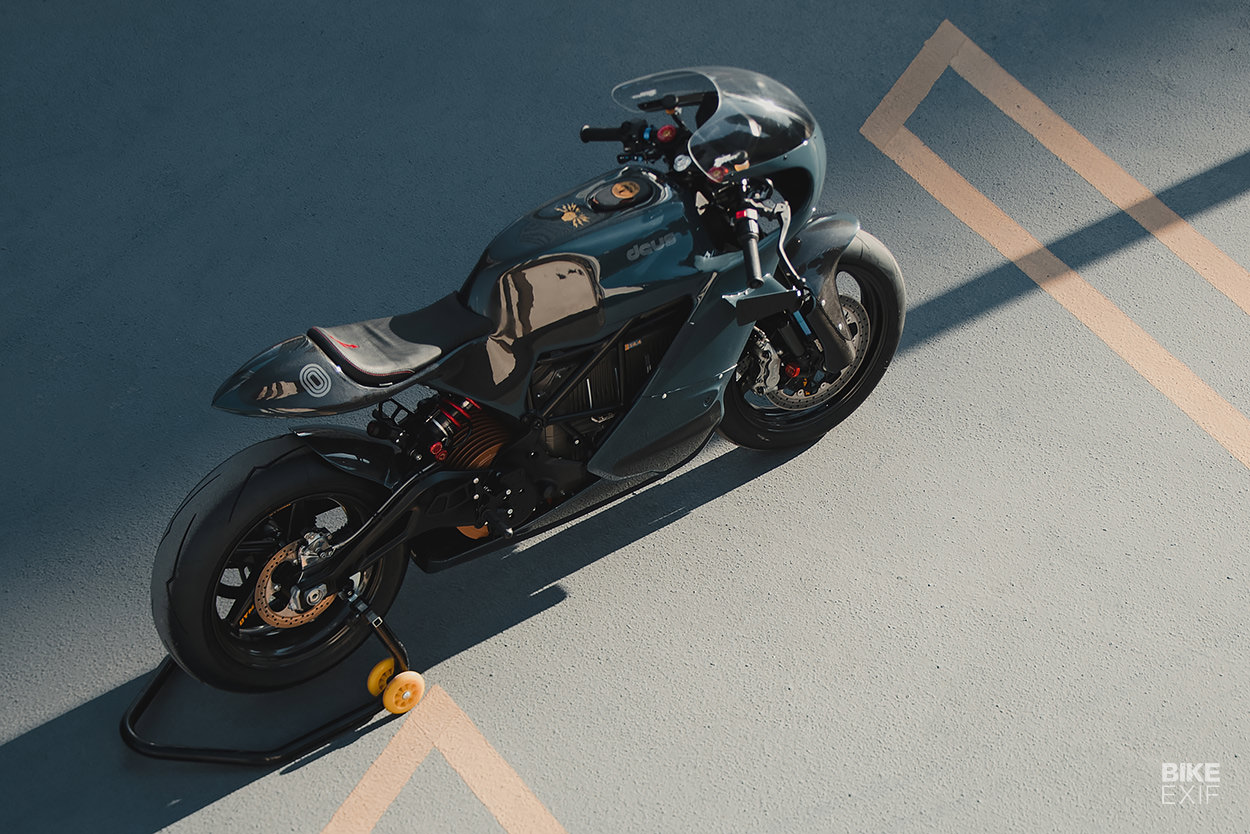 Following this Paul Taylor from Taylor Made Racing built the actual bodywork out of carbon fibre. Fun fact: Apparently the whole Cafe Racer themed bodywork consists of three pieces and they are all attached to the body with just four bolts on the OEM mounting points….What?! 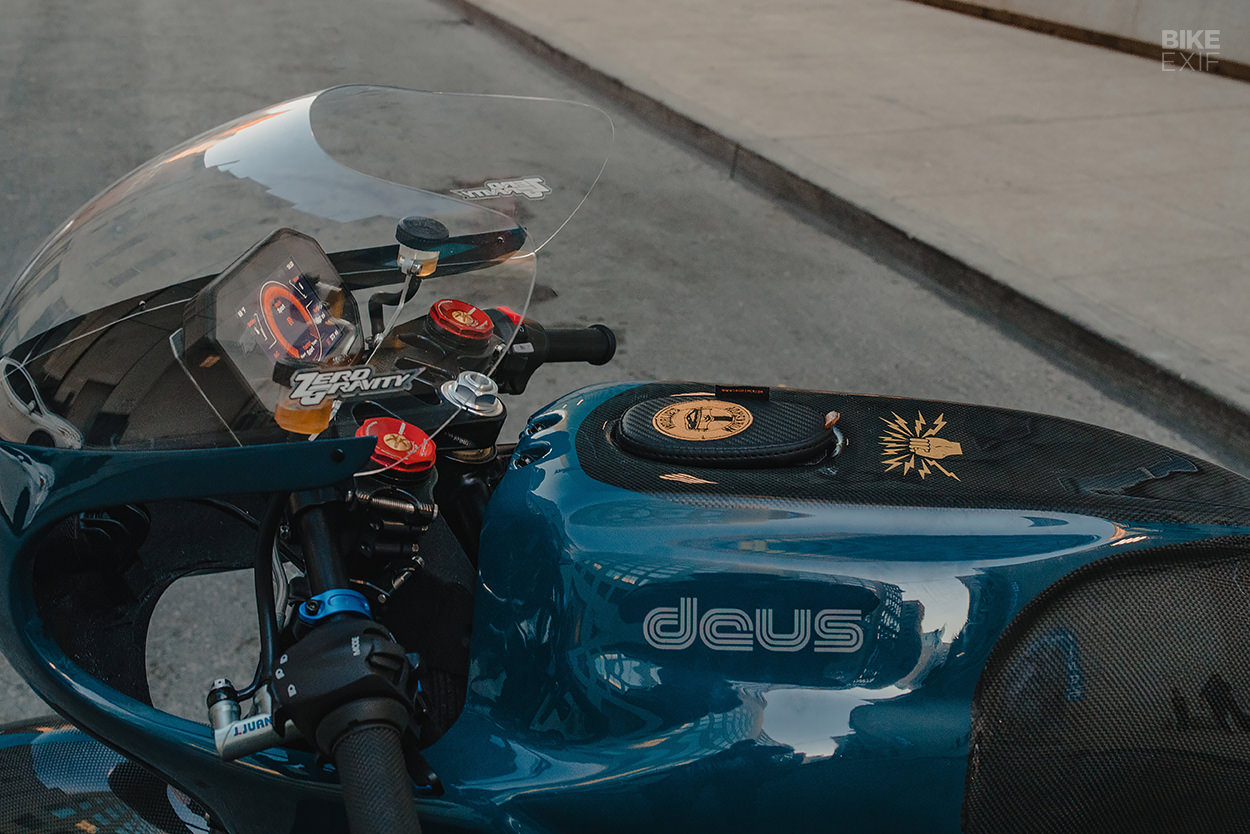 The retro-style windscreens are something we all love and the hand-blown one-piece windscreen on this build just looks stunning with the entire carbon fibre bodywork. 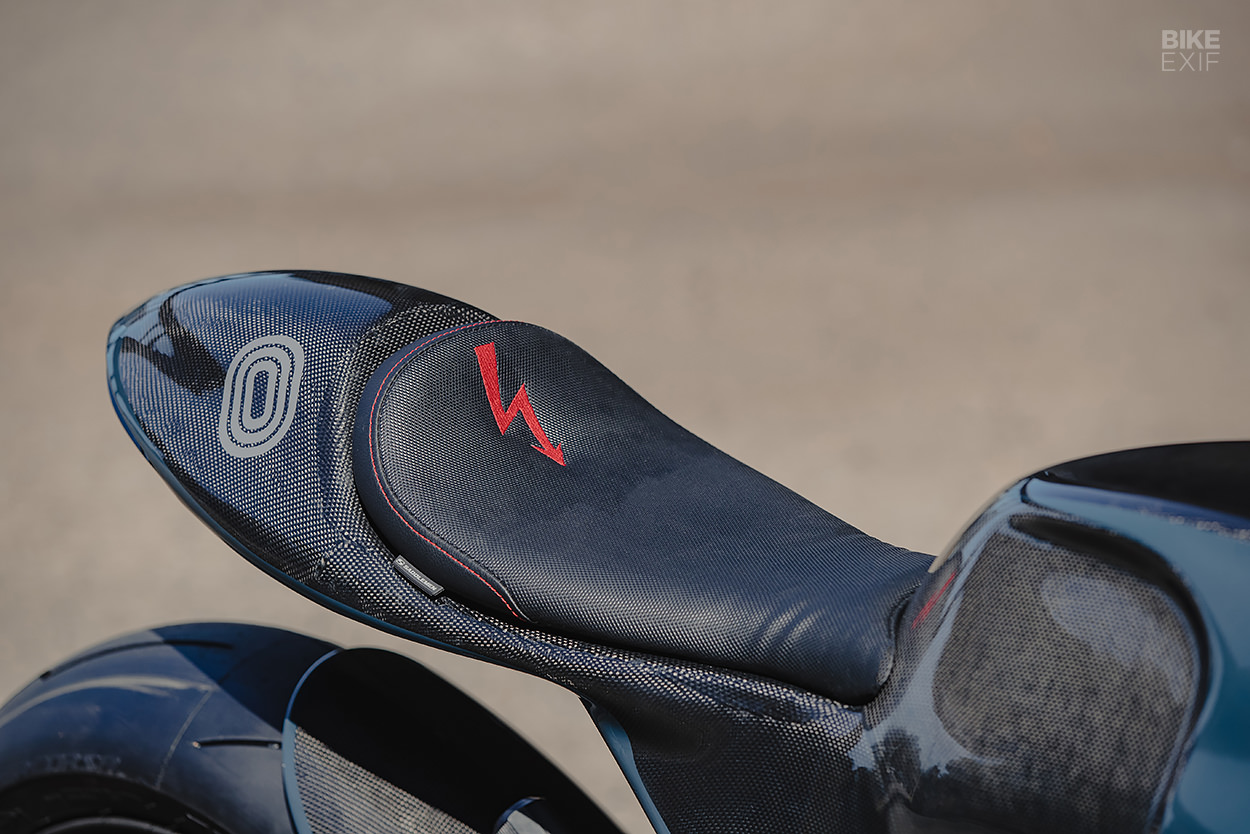 Aside from this, the custom saddle and the scalloped paint job (in stock SR/S colour code..sort of)  gives it a nice elegant touch and blends in with the overall retro electric cafe racer theme. 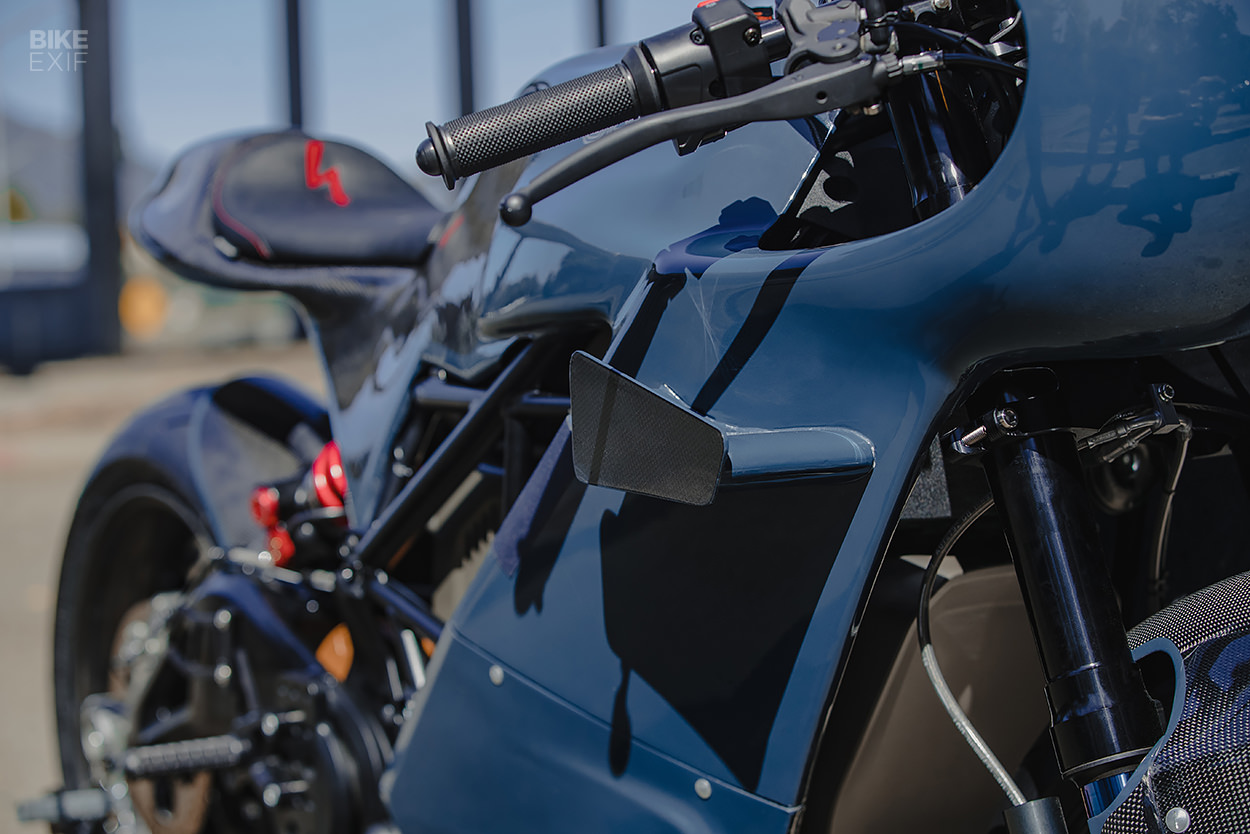 Furthermore, the winglets that you see are actually sourced from an F1 race car and it has been modified with custom end caps. Woolie added these custom winglets to give the bike a retro Porsche racecar look and we think it’s an excellent touch.

“The winglets will tend to stabilize the bike quite a bit more than you’d think, especially at speed, and add a little bit of downforce,” he explains. “But mostly I just felt like it added another detail that was cool and different.” 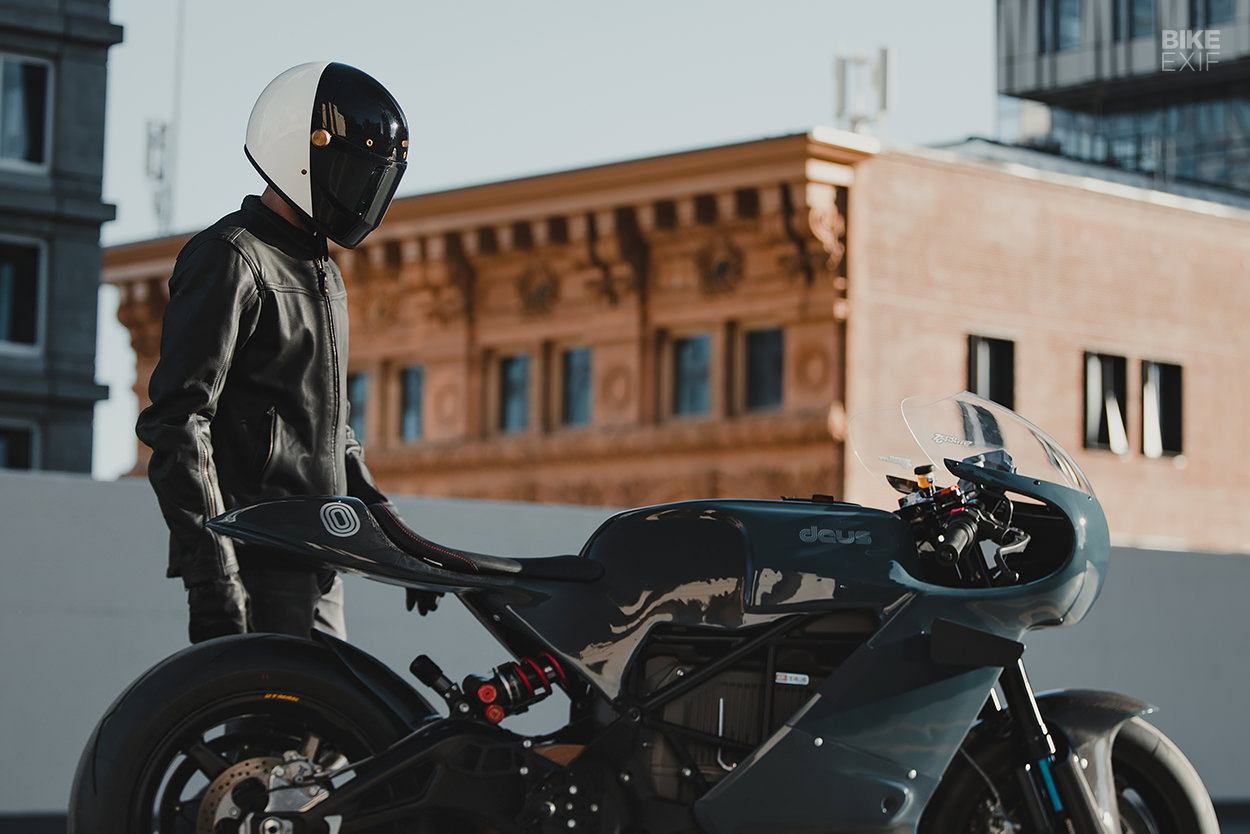 As folks from Dus and Zero are all about going fast, you can find a lot of aftermarket race parts around the bike. In this build, Woolie has added in factory WSBK spec suspension setup from Showa and a set of Dymag ultra-light carbon wheels. 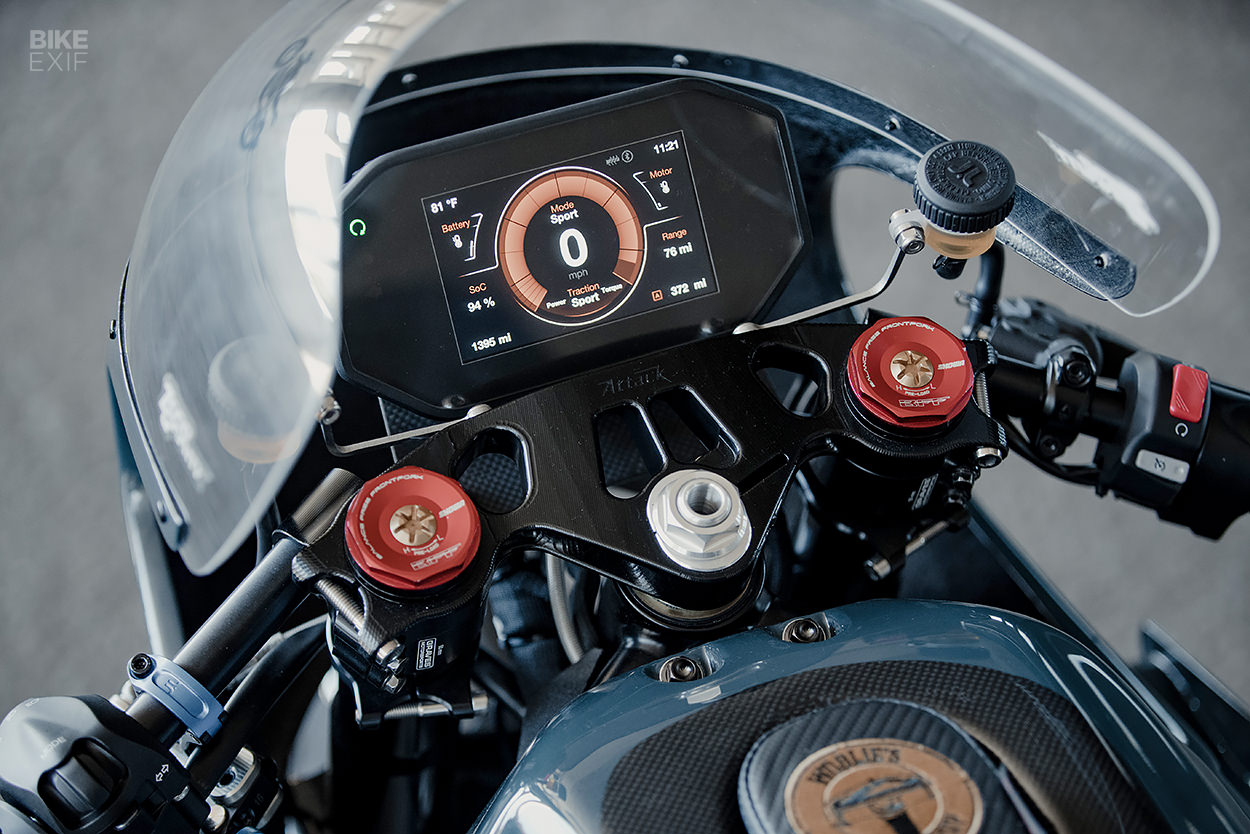 Aside from this, custom Attack racing adjustable offset triples hold the forks together and there is also a set of Gravers motorsports clip-on which gives the cafe racer the retro stance.

As for the brakes, J.Juan Racing braking components with a custom Banke Performance calliper on CNC machined mount at the rear and OEM Zero front rotors upfront take care of braking. 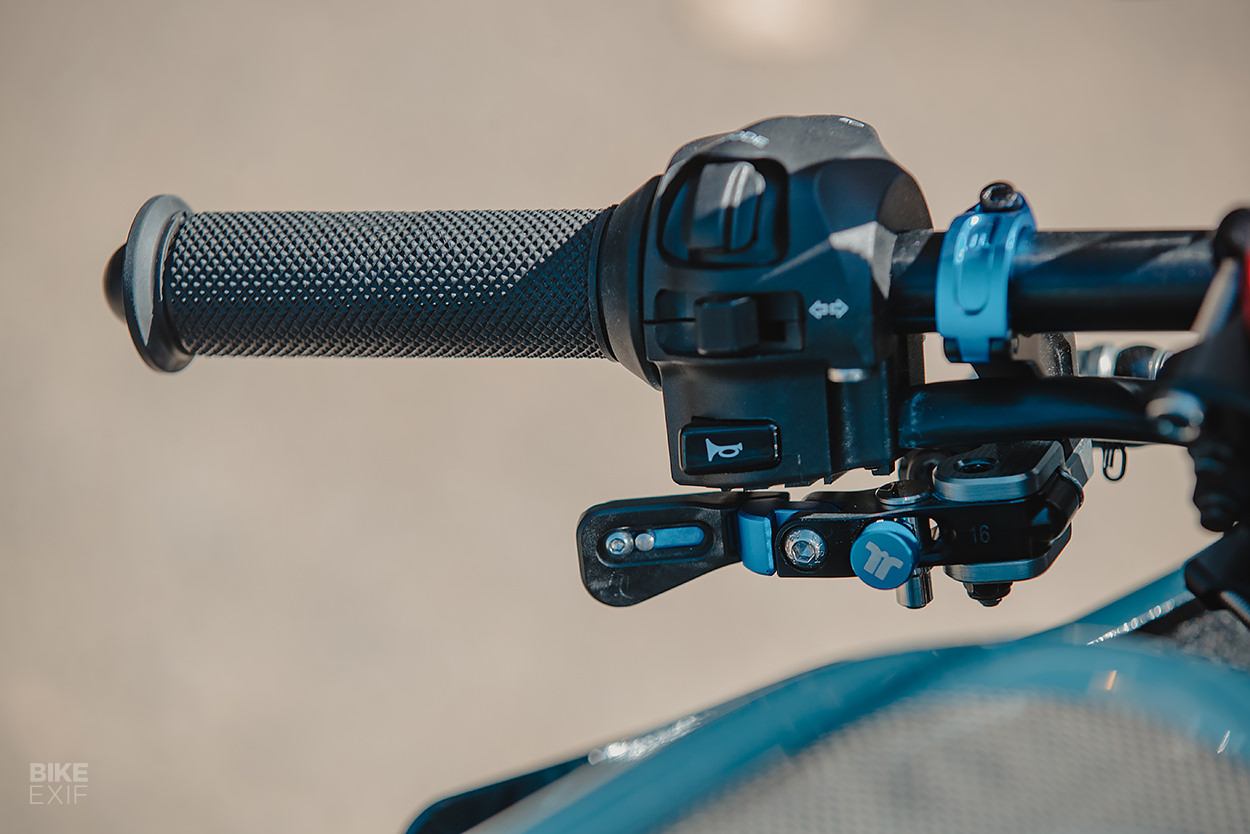 Since the Zero SR/S is an electric bike and doesn’t have a shift lever, Whoolie has added in thumb brakes on the handlebar to simplify foot control.

Turning a modern electric motorcycle into a retro-style cafe racer takes a lot of work and of course, needs a lot of skill. Overall, we think this Zero SR/S Cafe Racer project has been very well executed and we love how electric motorcycles are slowly starting to get into the custom motorcycle scene. Now, tell us what you think of this build!