Stellar streak for Yamaha since the season opener, this time with Fabio Quartararo. The TISSOT Grand Prix of Doha took place during the weekend and it was Fabio Quartararo of Monster Energy Yamaha MotoGP that delivered a stunner by the end of the race. The Frenchman made a clean sweep for Yamaha so far and head up the first ever French 1-2 in the premier class. Compatriot Johann Zarco of Pramac Racing took second as he dueled rookie teammate and polesitter Jorge Martin to the line. Zarco made history for his nation and waves in the standings as he takes over the Championship lead. Martin, meanwhile, makes his own waves as the rookie led much of the race from a spectacular start, coming home third for his first premier class podium only second time out. B

Yamaha teammate Maverick Viñales was also in the run for a podium position. A small evasive action in the final stages had him just miss out on a podium by 0.6s, but he scored 11 solid points with his fifth place. The victory puts Quartararo and Viñales in second and third place in the championship standings, both with a 36 points total. Yamaha and the Monster Energy Yamaha MotoGP team remain in first place with a 50 and 72 points total respectively after Round 2.

The MotoGP paddock will travel to Portugal next for the third round of the 2021 MotoGP season. The Grande Prémio de Portugal will be held at the Autódromo Internacional do Algarve from 16th to 18th April, 2021. “I have no words. This race win is different from the previous three MotoGP races I’ve won so far. After the last race I was a bit disappointed in myself. During this race it was totally different. I was thinking so well, I played a lot with the map and the tyres. Nine or ten laps to the end I thought ‘Right now is the moment to push and show our potential’. It’s great to finish in first position!

I was so happy with FP4, because I felt like I was the only rider to do only high 1’54s laps. So we made a plan, but the team also told me to play it by feeling, and I did that really well today. I was feeling so good. When I overtook Zarco, I also immediately overtook Martin. I was so scared when I hit the debris on track. I thought ‘Not a puncture, please!’, because it made a bad sound. My last lap didn’t feel as fast as the earlier ones, but it was enough for the win. Singing the French anthem with Zarco today was the best moment I ever had.” “For sure, the race didn’t go as we expected, but I’m still quite happy, because in the end this is a positive result. I was managing the tyres a lot at the beginning so I could be stronger at the end. It paid off, because at the end I was very strong, especially the rear grip was good. I just wish we would have had five more laps. We will try to come back stronger. I know we have to improve some areas, mainly my riding style.

The most important thing is that the bike has great potential, and we demonstrated this in the last ten laps. I was trying to overtake and be stronger every lap. We tried, and overall I felt it was a positive day, even if the results didn’t show our true potential for Qatar Race 2. Still, I think fifth is a nice result, and I fought back with all that I had.” 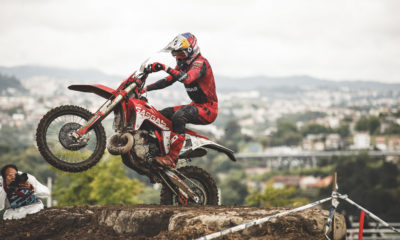