The feeling of succeeding for your first time is extremely memorable and emotional. For Jack Miller, it was a day full of memories to cherish as the Australian stood on the top step of the MotoGP podium for the first time in five years and the first time as a factory Ducati rider. With two muted races, dramatic incidents, surgery, and a crash last time out on the run, up till the Gran Premio Red Bull de España, Jack Miller’s emotions in parc ferme was more than just a moment of joy.

The Ducati Lenovo Team rider put on a masterclass through the Circuito de Jerez-Ángel Nieto. He fought it out at the top to cross the chequered flag first ahead of teammate Francesco “Pecco” Bagnaia and Petronas Yamaha SRT’s Franco Morbidelli. Miller has admitted in recent weeks that he’s been in the trenches following a disappointing start to the year, but he was certainly gritting his teeth and digging in. Monster Energy Yamaha’s Fabio Quartararo was only able to go a tenth quicker than the Ducati man and the gap was at three-quarters of a second with seven laps completed. As the Frenchman edged his lead out to over a second for the first time, Aleix Espargaro slipped a place back to fifth after falling into the crosshairs of Bagnaia’s Ducati down the back straight too. But as one Ducati rider moved forward, another crashed out: rookie Enea Bastianini (Avintia Esponsorama) hit the deck at Turn 2 – his first DNF of the year, although he continues leading the Rookie of the Year standings.

It was indeed a day Jack Miller will remember forever. The MotoGP paddock heads over to the classic Le Mans circuit in just two weeks’ time for the French Grand Prix. “I just tried to do what I could. I did a lot of laps all weekend by myself and I knew I had a reasonable pace. When Fabio came past I thought ok I’ve got a bit better pace. I dropped down into the 37s for a few laps there with him. But I wasn’t able to maintain that, but neither was he. I didn’t expect him to drop back to me but he did. I was just able to and I knew I had a bit of a gap behind me. If I could get past Fabio, I could see he was struggling. Get past him, get my head down, make no mistakes, and just try to punch out the laps. Those last seven or eight laps were the longest of my career. I mean, it’s just indescribable what I’m feeling right now.

It’s a flood of emotions: happy, sad, everything. I wish my parents were here to celebrate it with me but they’re back at home, I know they’ll be celebrating. I want to thank everyone for all their support, I’ll try to do it again soon.”

“The last two weeks have been tough for me: I couldn’t trust myself and what I can do on the bike. Today, when I saw Quartararo struggling, I thought I could try to take the lead, even though I wasn’t so confident that I could stay in the lead for so many laps.

But finally, I did it and took my first win with Ducati. I can’t thank Ducati enough for giving me this opportunity. Wearing these colours is a dream come true for me, and it means a lot. Thank you, Gigi, Paolo, Davide, Claudio and the whole team for having always believed in me”. 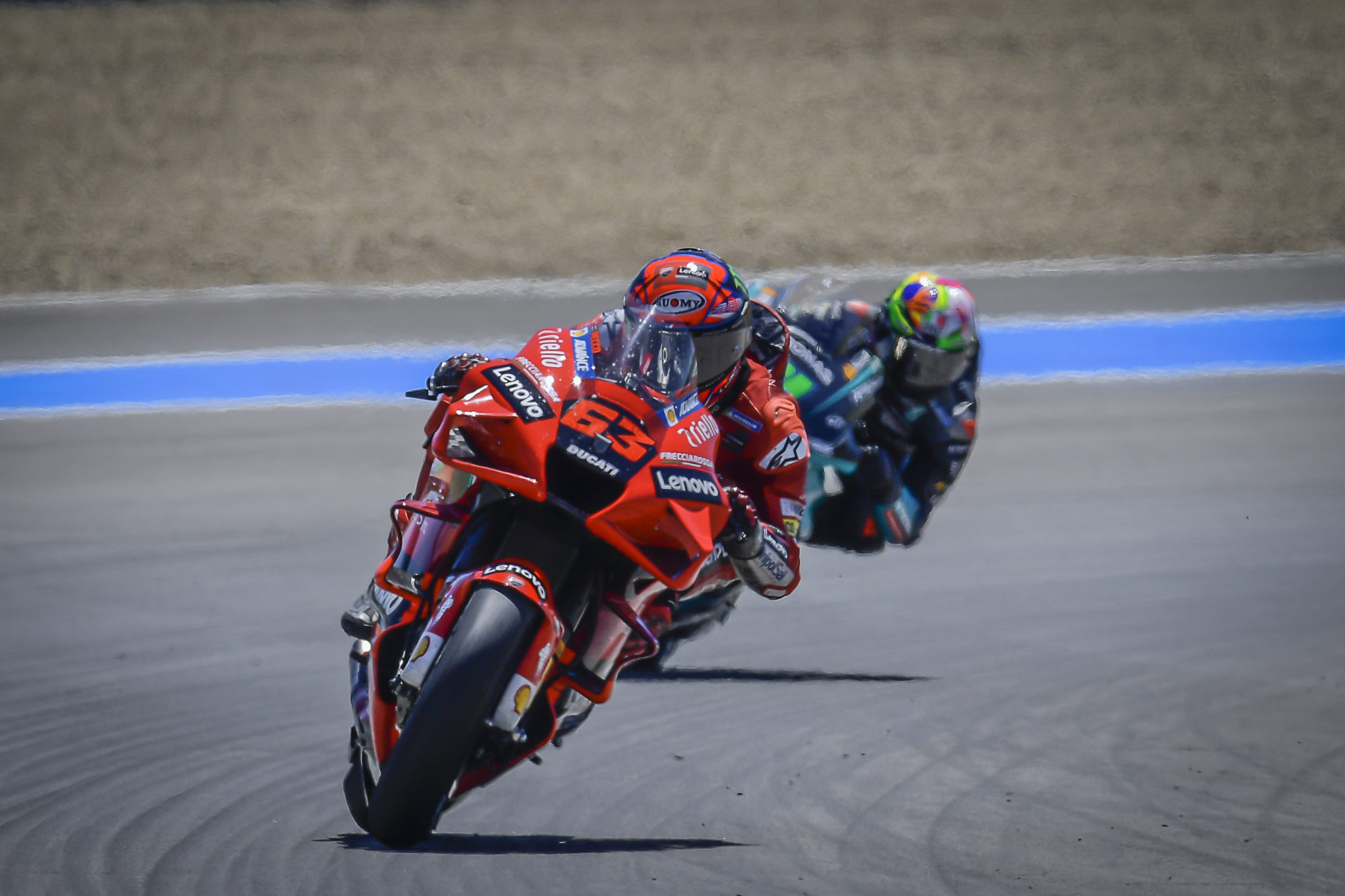 “Today in the race, I felt really comfortable riding the Desmosedici GP bike, thanks to the great work done with my team over the weekend. I started to push after the first four laps not to stress the rear tyre too much: my pace was good and allowed me to catch up with my opponents and pass them. In the end, I was even catching Jack, but with two laps to go, I preferred to defend the second place. Today’s result is really incredible, and I hope we can continue like this in the next races, which will be held on tracks favourable to our bike. Tomorrow we will have another day of testing, so we have to stay focused”. “I think I’m the happiest person in the world right now: Jerez has always been a difficult track for the Ducati bikes, so to be able to finish first and second today is crucial for us, especially from a technical point of view. Both riders had a sensational race and were fantastic. They knew how to run a mature race: Jack kept a good rhythm and perfectly managed the race, while Pecco did an incredible performance, ending second and taking now the championship lead. Congratulations to both of them, to the team and all of Ducati Corse”.

Tomorrow the Ducati Lenovo Team will take to the track once again at Jerez de la Frontera for a day of post-race testing.