The weekend went well for the premier class and it is no exception for Moto3 as well as Pedro Acosta recorded his first victory in just his second GP start after beginning the race from the pitlane. The Red Bull MotoGP Rookies Champion now has a 9-point advantage in the championship standings with Jaume Masia in 3rd spot.

Consistent with his first victory for the Red Bull KTM Ajo team in the season-opening event the previous weekend, Jaume Masia rode strongly with his KTM RC4 to seal Pole Position on Saturday for the Tissot Grand Prix of Doha and third significant fixture at Losail after the official IRTA test and the Barwa Grand Prix of Qatar. The Spaniard was then part of a relentless fifteen-rider chase for podium places and only two incidents in the pack on the final lap dropped him to 9th.

Rookie Pedro Acosta faced the handicap of starting the Grand Prix from pitlane after receiving a penalty during Free Practice 2 on Friday. The teenager launched away with Red Bull KTM Tech3’s Deniz Öncü for company. He squashed a seven-second deficit by mid-race distance and then scythed through the field to sensationally take the lead on the last circulation and claim the checkered flag in exceptional circumstances. Elsewhere Öncü recovered to 18th as Red Bull Tech3 teammate Ayumu Sasaki captured 7th place.

In total six KTM RC4s filled positions in the top ten with Niccolo Antonelli making the podium in 3rd. “I don’t know how I did it! When you work with the best guys then it counts. Yesterday I saw everything a bit dark with the penalty but this morning I said to my assistant ‘I think we can do it’. With the lap-times I thought I could be in the group and finally we made it. I can only say thanks to my family, assistant and the team.” 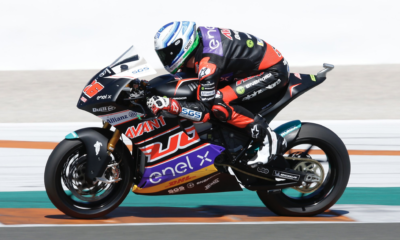