iMotorbike’s iM Cubaholic covers everything about Honda’s famed Cub lineup. On this week’s episode, we are having a look at the custom Honda Super Cub Vintage Racer: The Firefly by Deus Ex Machina Japan! On this week’s episode, we are bringing you all the way to Deus Ex Machina Japan’s collection to show you one of best custom Honda Super Cub build on the planet: The Firefly! Deus Ex Machina Customs builds some of the finest custom motorcycles in the world. Their journey started back in 2006 with a shop in Sydney, Australia and within a decade they expanded into an empire with a global presence. As of 2020; Deus has multiple branches in Venice, California, Bali, Tokyo, New South Wales, Milan and many other cities around the world. Custom motorcycles are the heart of the brand’s operation and it’s these bikes that fulfil Deus’s identity.

Talking about custom bikes, Deus has no boundaries when it comes to their choice of donor bikes. Deus custom builds everything from old to new with no limitations on the size or type of bikes. One of their unique custom Cub builds is the highlight of our topic today; The Firefly. The Firefly is the first build by Deus Japan’s Director of Motorcycle Operations, Matthew Roberts. Why we chose Firefly? the answer is simple; The Firefly takes modifying Cubs to a whole new level and shows how Cubs can be modified beyond limits. On top of this, the character the Firefly process is something we rarely encounter in custom builds. With the Firefly, Deus really reimagined and brought up a Vintage Cub Racer that we never got to see. The Firefly is based on a 1961 Honda Super Cub and echos styling and functionality of small capacity vintage GP or TT race bikes from the 1950s and 60s. Just from a glance, we can see Deus really pushed design and engineering boundaries with the Firefly.  We have come across many custom Cubs but hands down, the Firefly is definitely one of our top favourites.

“With Japan the birth place of the Super Cub, stepping up to customize one here means delivering a design that punches well above its weight in every aspect” admits Roberts, referring to his striking yet reverent re-imagining. “A concept that stops people in their tracks is one thing, but its the deep connection and respect to the original machine’s DNA that gives the Firefly endearing timeless character ” – Deus Japan 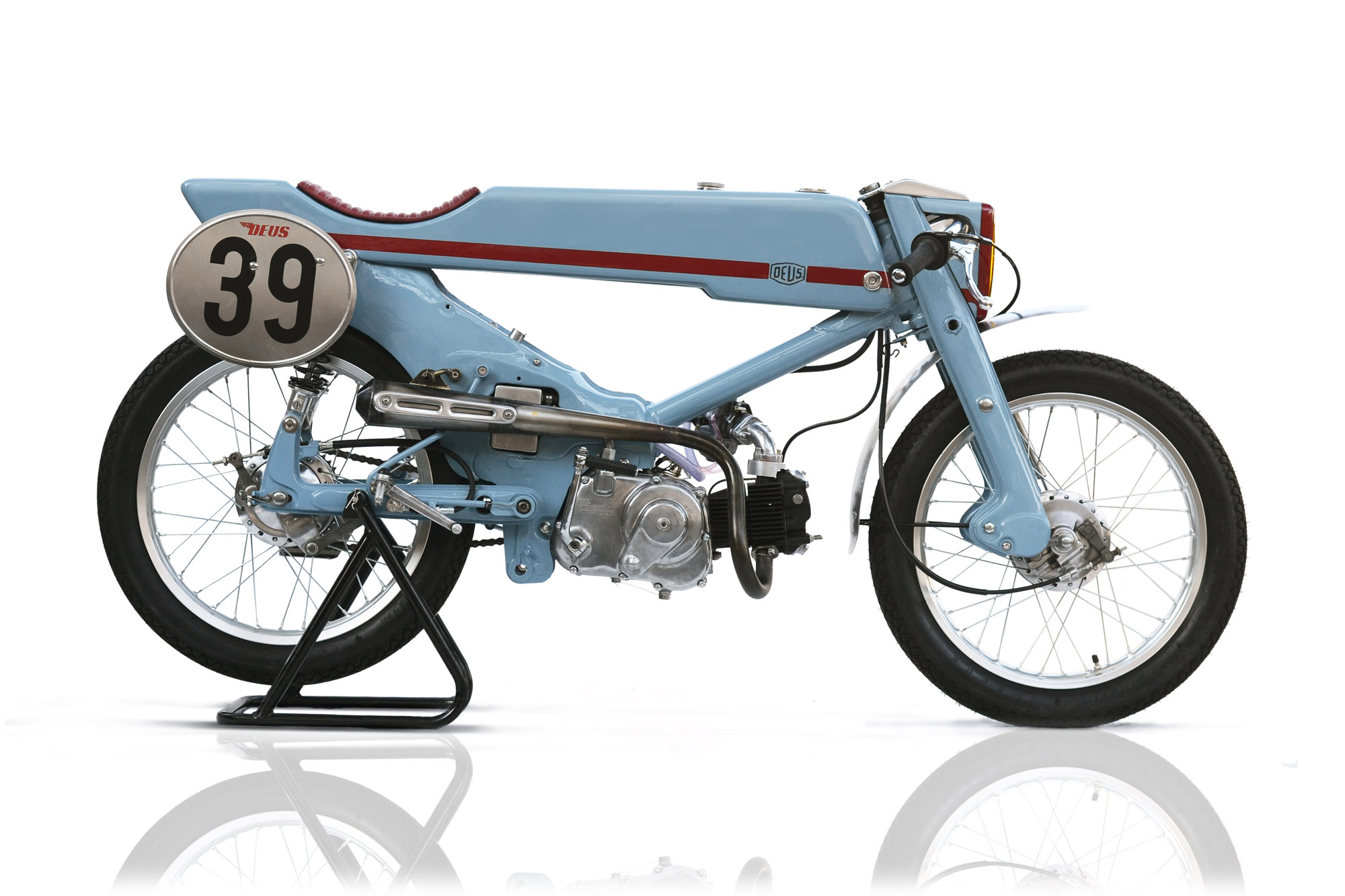 To begin with the design, the Firefly follows the traditional design quirks of GP and TT; from its long and low lines that runs from the headlight to tail. Along this line, the curvy oxblood red seat stitched by Japanese moto upholstery master Miauchi-san blends in with the overall design and paint scheme. Looking at the Firefly, you can see that the original C105 speedometer is carried forward with the custom build to show the machine’s heritage; a reference to the long lost racing prototype. 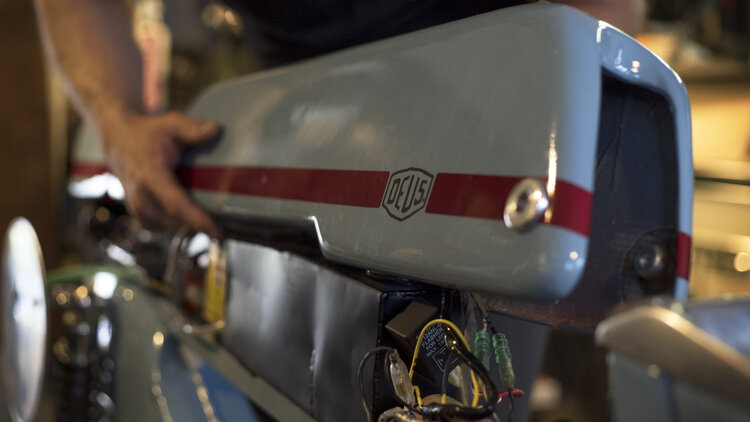 Rober’s own design with modified Super Cub frame with an epoxy composite monocoque gives the Firefly a striking silhouette while being light. According to Deus, the Cub’s unique front suspension, slim top bridge and frame allowed the creation of this body.  The widest part of the body measuring just 105mm hides the fuel cell, battery, coil and electrics. Yes, all these components are laid out with surgical precision along a slender backbone. Moving on, the polished original C105 hubs with Japan DD alloy rims with custom spokes and  2.75 x 17 rubber shoes perfectly fit inside the narrow forks and rear fender to fully complete the mix. As for the suspension, the Firefly gets an upgraded adjustable alloy race shocks and externally mounted front fork rebound unit. On top of this, the Firefly has numerous other bespoke and hand-made components such as alloy top bride, stop light and rear set foot controls. Don’t be fooled thinking this is just a show bike. Although the Firefly has a roadgoing presence; the Firefly is also designed to battle in the pre-1964 series race in Japan. All the lighting is attached with quick-release mechanisms so the Cub can race at the Fuji Speedway on Sunday and hit the Tokyo streets on Monday! Other than these custom parts, Deus re-engineered, redesigned or improved every nut, bolt, bearing and bush, from engine components to front suspension internals, from decades-old factory blueprints. “Mill and lathe have kissed enough of this lithe steed to leave a HRC factory team envious” smiles Roberts. Just as Deus Japan said; We also doubt if Soichiro Honda’s original team would have ever imagined their humble first series Super Cub transformed into a pole-position-ready racer over half a century later. However, we are sure they would be proud to see how their Cub has turned into something this extraordinary. On top of this, the Firefly really shows the limitless possibilities that our much-loved Cubs can bring; seeing an example like this is simply mindblowing.

Ep.4: Build Your Own Electric Honda Cub at Home! 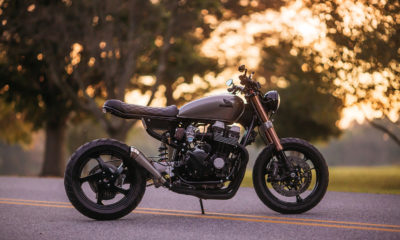